Here's a breakdown of where the time was spent making Touch Treasure. 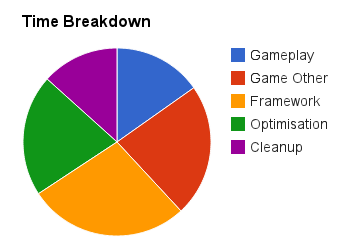 You can see a small proportion of time was spent on creating and tweaking the actual game play  Putting together all the supporting elements like results screen, mode select screen, statistics tracking and save data took longer when combined together.

About half the time was spent on the framework and optimisation. Not particularly surprising since it was my first PSM game. The framework should make a good starting point for future games.